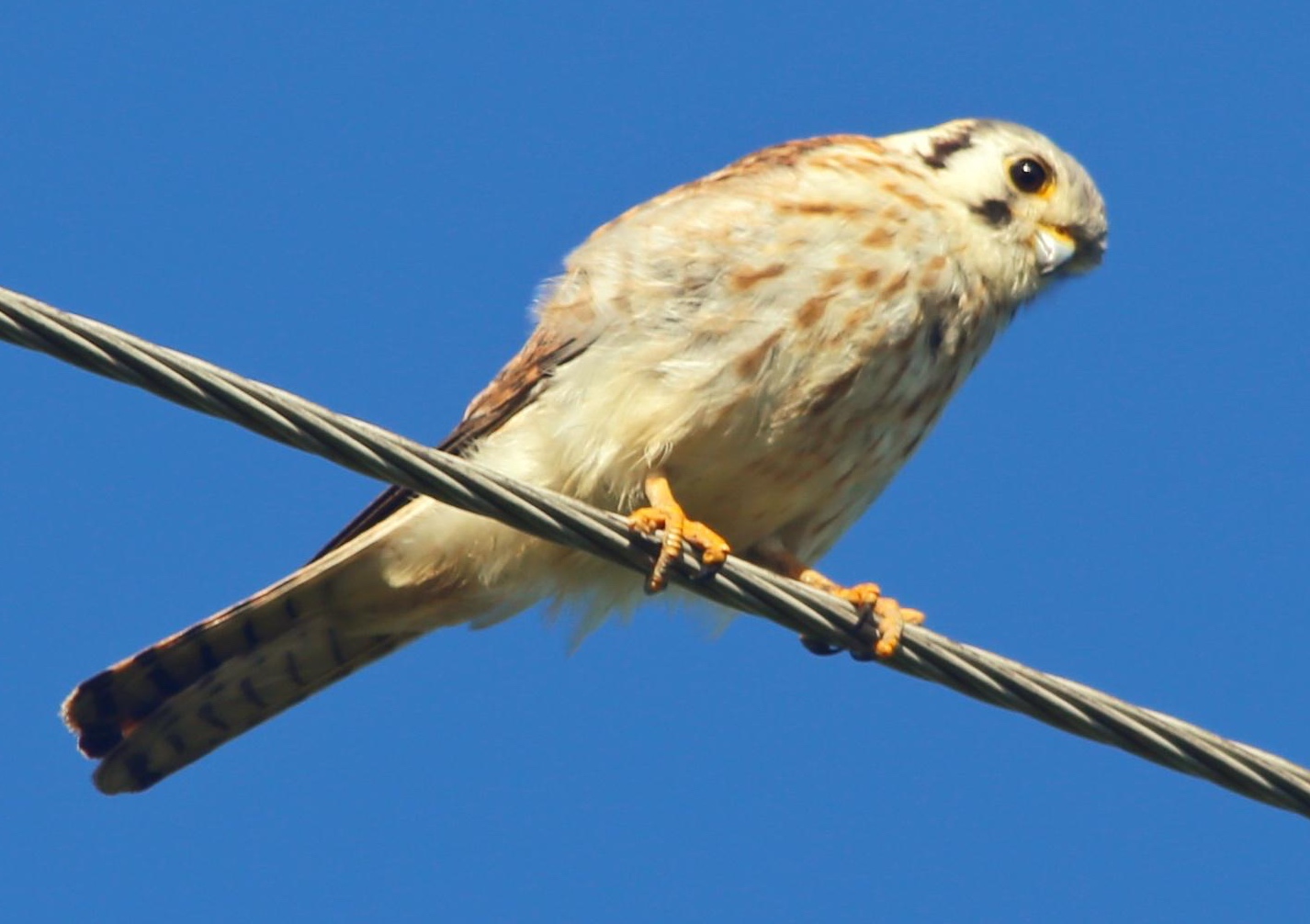 Whatever you want to call it, it began sometime around October, almost two and a half years ago. It was just before the beginning of the pandemic.

As often with beginnings, I wasn’t aware that something began. I don’t remember the exact moment when she first drew my attention. She is not a big bird (maybe 10 inches from her beak to the tip of her tail). It was probably the call she made upon landing that first made me take notice. It was a high-pitched staccato of five or so brief, excited-sounding cries. It was not a melodious bird song. But it got your attention.

When I first heard her, I spotted her sitting on top of one of the six 30-foot-tall royal palm trees that line the eastern side of our property. I saw a midsized bird. She looked bigger than a sparrow. But smaller than the red-shouldered hawks who live here on the edge of the Everglades.

It did not occur to me that this was a noteworthy event. 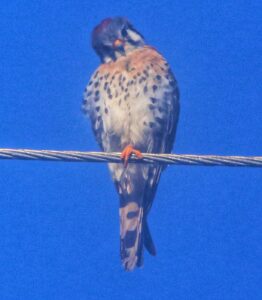 Something shifted in me when I noticed her arriving every day at about the same late-afternoon time. She’d make the same high-pitched staccato every time, landing on the same palm frond. I noticed that she would stay in that place for up to an hour. She’d sometimes repeat her trademark call, but mostly she was silent. Sitting, preening, looking at me, looking at her.

I began to look forward to her arrival. I’d have the binoculars handy. I used my Canon with the tele lens to take close-up photos.

I figured out that she was an American Kestrel. Also called “sparrow hawk,” they are North America’s smallest and most colorful falcons. The heavy dark brown stripes across the tail of this one showed she was a female (I first thought she was a male).

I discovered that she would spend most of the earlier portion of the day sitting on the powerline along the dirt road leading to our property. Around 5 pm, she’d take off and fly the quarter mile over to her landing spot on the tree. 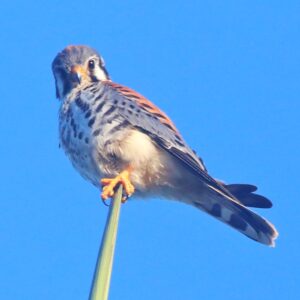 I enjoyed entertaining people with predictions of her arrival. Sitting with David or my friends Vivienne or Bryan on the solarium, enjoying a glass of wine and the light of the late-afternoon “moth-hour” (as Viv likes to call it), I would say: “Do you see that bird over there sitting on the powerline? It will soon fly over here and land on the tip of that palm tree.” And I would point to the palm tree that was her preferred landing spot. With each prediction coming true, I felt the feeling we used to have as kids when we believed in magic and thought that we might be chosen ones capable of it.

At that point, I had probably already named her “Baby Hawk.” “Baby” is a prefix of endearment that David and I have used for other animal visitors here at the “farm” (that’s what we call our place even though it’s not a farm). For example, there were a couple of “baby alligators” in our pond for a while. They were gone after Hurricane Irma.

The communion with Baby Hawk became an important part of my day. David was supportive. When we would hear her arrival call, he’d say: “That’s OK, you go and be with Baby Hawk.” I would walk over to her preferred palm tree where I had pre-positioned one of our plastic Adirondack chairs and the tripod with my Canon on it.

But mostly, I would just sit with her at the foot of the tree. Often for close to an hour, until she flew off into the dusk.

Once, a long-time friend was understandably miffed when I ended our call saying: “Sorry, I have to go and see my hawk” (I had heard her arrival call sign).

Baby Hawk, for her part, graced me with little gestures of attention. When I joined her, she would bob her head up and down. Sometimes, she would leave her perch briefly to fly right over me to land even closer, for example, on one of the wooden beams in the shed. One time, I saw her sitting on the veranda railing in front of my bedroom. In many of my photos of her, she looks at me intently.

She became a fixture (some might say a fixation) of my daily life. When someone would shoot their gun nearby (which happens often here), I worried about Baby Hawk’s well-being (especially during dove hunting season). I would look for her on the powerline on my drive into town. I’d stop and roll down my car window to serenade her with her song. When walking on the veranda of the second floor as I went about my day, I felt that I could tell which of the distant dots on the powerline was she–not by what I could see visually but by the feeling I sensed.

The months went by. November, December, January, February, March, April. All marked by my daily times spent with Baby Hawk.

In the outside world, the pandemic grew.

One day in April, I saw her above the powerline in a skirmish with a larger hawk. I took a photo of her after a rain shower a bit later. She looked unkempt and forlorn. I chalked it up to her feathers being wet. 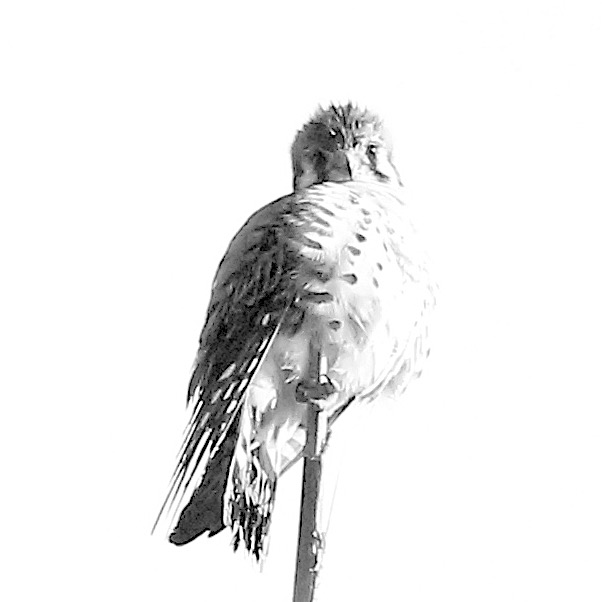 A few days later, on April 7, she disappeared. Three days later, I wrote in my journal: “I haven’t seen Baby Hawk coming in for three nights now. It fills me with a sense of loss. I wonder if something happened to her.”

On the 16th, I wrote to my friend Vicky: “It has been nine days now that Baby Hawk has not made her usual arrival at night. I know this was bound to happen. Of course, this is nothing compared to the loss that so many people are suffering because of the pandemic.”

In my journal on the 27th, I wrote: “I thought of Baby Hawk today. I wondered if she is sitting on a bunch of eggs. I hope she is alive and will surprise me one day with her return.”

On the third of the following month, I wrote: “I woke up to the call of Baby Hawk, unable for a moment to tell whether it was real or just a dream (it was just a dream).”

When I heard her call, I ran outside to find her sitting in her usual place. My heart was racing. I cried tears of joy. 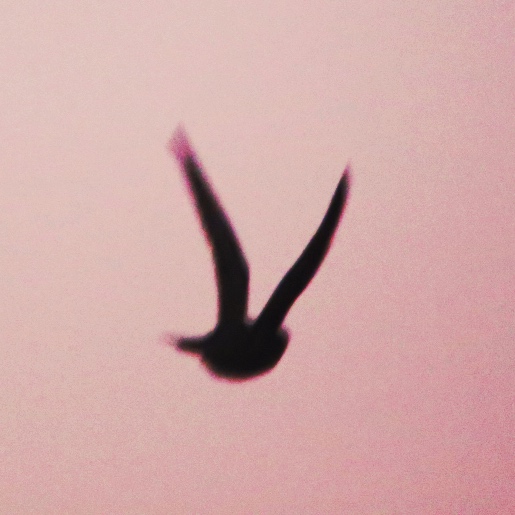 To make a long story short, we had another season of six months or so of precious daily time together. In October that year, she left again. She returned the following spring.

But after that second return, she did not resume her habit of spending time with me. She flew over from the powerline for a few days but then stopped coming. I still saw her side by side with a second Kestrel on the powerline when I went into town. I’d often stop and roll down my window to call her name. Baby Hawk. Baby Hawk!

She would look at me and then swoop off into a wide arc across the field.