Selling tegus has become a “pain in the ass,” my friend Bradley tells me the other day. He’s come by to have me teach him–again–how to fly his DJI 4 Phantom drone.

Tegus are lizards up to four and a half feet long. According to Wikipedia, “they are notable for their unusually high intelligence and can be housebroken.” Bradley has been making a living catching, breeding, and selling them for the past decade. 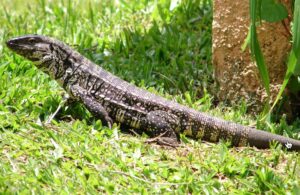 Some years ago, Bradley called me for help because he had crash-landed his drone into a canal near the former Aerojet-Dade Rocket Fabrication and Development Facility in the Everglades. The abandoned area is just three point eight miles southwest of my house. Inaccessible to vehicles, it is littered with concrete bunkers that a company called Aerojet built in the 1960s to test solid-fuel rocket engines for their potential use in the Apollo program. The company even dug a canal to ship the enormous rocket engines on giant barges to Cape Canaveral. During a nighttime test, the flames could be seen from Miami, nearly some 35 miles away. During the final test, an accident at the facility caused cars in nearby Homestead to be covered with propellant, which was made with hydrochloric acid. One can only imagine the health hazards.

NASA eventually chose liquid fuel engines for their Saturn 5 rockets, and the Aerojet facility shut down.

Bradley had crash-landed his DJI in the Aerojet Canal doing his own kind of test flight to simulate using the drone to check on his tegu traps remotely. Bradley is an entrepreneurial guy. He used to sell IBM mainframes in the 70s. 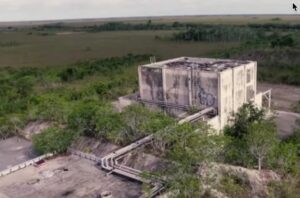 Part of the Aerojet facility

So, there he was, probably 65 years old now, stripping down to swim trunks and about to dive into the canal to fish out his drone. My task was to do something in case there was an alligator. I asked, “Bradley, what do you expect me to do if there is a gator?” He handed me the same small pistol that he had pulled out earlier when we explored the abandoned bunkers, pointing it with outstretched arms and a sudden sideways motion into the dark at potential enemies, the way detectives do on television.

Bradley retrieved his drone that day. But the water had ruined it. So, he bought another one. It never became part of his tegu trapping operation.

Florida lawmakers recently outlawed doing business with the critters. They consider tegus an invasive species, just like the pythons who escaped from snake lovers’ enclosures during Hurricane Andrew or some storm like it.

Bradley says that long-time trappers like him are “grandfathered in” by the state–but he’s unsure for how long he can go on selling the animals. He says that these days, the business has become onerous. He can only sell to buyers outside the state. The critters’ enclosures must, per new regulations, have four-foot-high walls of expensive concrete. Bradley says that’s stupid because tegus can climb up on concrete walls, but not on the plywood he’s been using all these years.

As Bradley sits down on my sofa, his mobile phone starts ringing. “I got to take this,” he says, putting the call on speakerphone. There’s a big white bandage around his left hand, covering a recent tegu bite. The right hand is full of scratch marks, too.

Bradley says “yes” but that the price is 250 dollars.

She says he told her in a previous conversation it was 150.

“Are you disabled, by chance?” Bradley asks with an even voice. I listen up, wondering where this conversation is going.

“I recently promised a disabled woman a discount,” Bradley admits. “But the tegu in question had a broken-off tail,” he adds.

“I guess I’ll sell you one for 150 dollars anyways,” says Bradley.

“Great,” the woman replies. “But I can only put ninety dollars on my credit card. I will have to send you sixty in cash by mail.”

“How about you call again when you can pay the total by credit card,” Bradley says, adding: “And shipping will be an extra 60 dollars.” He looks at me and rolls his eyes.

“I’ll think about it,” the woman says curtly and hangs up.

I met Bradley maybe six years ago on the dirt road leading to my property. He had caught my attention with his blue pickup truck and his black German shepherd Troy who would stick his head through the window.

Bradley told me back then that an alligator once appeared out of nowhere and pulled Troy into a ditch and started doing the rotating-in-the-water thing that alligators do to suffocate their prey. Bradley says Troy and the alligator rotated so fast that he was lucky he didn’t kill Troy when he shot the alligator. Bradley ended up paying a vet $5,000 to stitch Troy back together.

I will always think of Bradley as the guy who didn’t have much money but spent $5,000 to save his dog.