When David cuts my hair

When David cuts my hair, he asks me to bring out the orange extension cord to plug in the electric clippers. I also bring up the little five-legged stool that rotates and has wheels. I set it all up at the southeast corner of our second-floor veranda.

He brings his equipment in a translucent toiletry bag. It’s filled with scissors, different color-coded clipping add-ons, and the clippers. 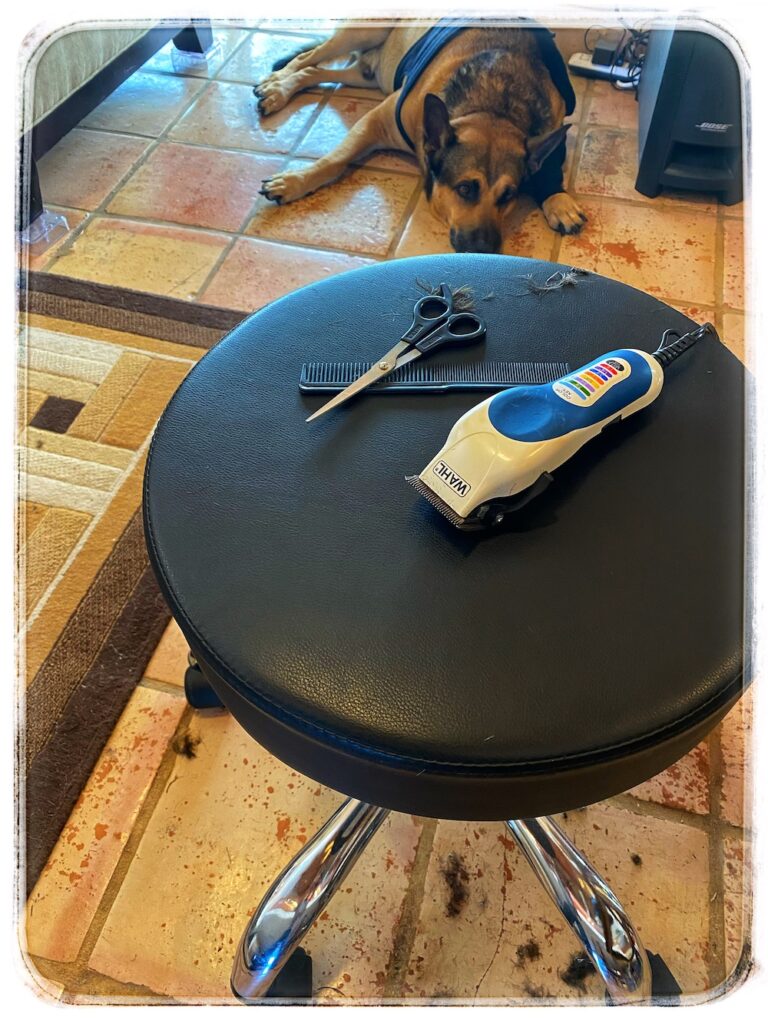 When David cuts my hair, he gives it his all. He cares about doing a great job. I always feel especially loved when he cuts my hair. That said, I also worry a tad that he might nick my skin with the clippers, especially along the back neckline (to be frank, that’s happened only once). Or that he might accidentally cut into my ears when he uses the scissors around them (which has never happened). But then again, I’m too much of a worrier.

I will wince a few times when the clippers pull my hair. He will say, “don’t be such a sissy.”

We started cutting one another’s hair maybe seven years ago. I’m sure it was David’s idea, even if I don’t remember exactly the conversation that started it. He probably liked the thought of saving the money for haircuts. We began one day and never stopped. When I showed him this story, he said that it was our neighbors here in the Everglades who gave him the idea (Luisa cuts Gabi’s hair; I don’t know if he gets to cut hers).

Cutting one another’s hair was extra special during the pandemic when many people’s hair began to look unkempt since they couldn’t see their hairdressers. We never had that problem.

As he cuts my hair, David will guide my head with his hands, putting it at the angle he wants. He will reprimand me if I move it out of position. He rotates me on the stool as needed. Getting that stool was very helpful for these haircuts.

When he cuts my hair, I’m mindful that there will be a finite number of these special moments. I think about wanting to film it all to have an enduring memory. I imagine three small GoPro-like cameras attached around me to the wooden posts of the veranda to film the whole procedure (he would never allow this). My mind wanders off imagining a software that could automatically create videos of different lengths, from thirty seconds, to, say, one and a half minutes (anything longer would be too much, I think). There will probably soon exist consumer devices like that.

When I ask David if he can cut my hair, he sometimes facetiously asks, “so, do I have some leverage now?”

When he cuts my hair, I watch my locks fall to the ground. I notice the grey in them but also think that they still look weirdly dark–actually, darker than they used to. I wonder if that’s because I’m not out in the sun so much anymore. I also wonder if someone might think I dye my hair. I think my father once asked me during one of our weekly Zoom calls if I dye my hair.

When he is done with the clippers, David asks me to go to the bathroom to wet my hair because it will be easier to cut with the scissors that he uses for the second part of the procedure. I will stand up and brush the cut hair off my shoulders to avoid bringing it inside.

Our Belgian shepherd dog Zeus usually lies right next to the stool I’m sitting on. This requires that David keeps an eye on him to avoid stepping on him or stumbling. Zeus likes to stay as close to us as possible.

When he is done, David says, “check it out.” I will go to the bathroom to look at myself in the mirror. I always like what I see. Sometimes, I might ask David to thin out the hair a bit more where it parts. He uses a special kind of scissors for thinning out the hair.

When we are finished, I get a broom and sweep my cut hair into the air off the veranda floor onto the grass one floor below. The other day I found a little ball of my hair in the grass. I picked it up and put it with the nearby aloe plants.

David is much better at cutting my hair than I am at cutting his. He asks me a lot less frequently to cut his hair than I ask him to cut mine. When I cut his hair, I need to follow his instructions to get it right. When he cuts my hair, I can completely trust him.

I cherish each time David cuts my hair.